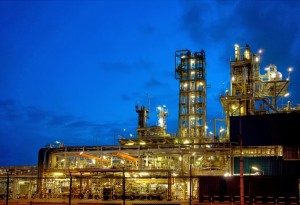 There is often a misunderstanding from customers that ask for an explosion proof light.   We ask them if that is what they need because many times they only need hazardous location or Class 1 Division 2.   The differences in the fixtures is considerable as well as the price.  Please see the below information on the difference of a Class 1 Division 1 light and a Class 1 Div 2 light.

According to the NEC, there are three types of hazardous locations. The first type of hazard is one which is created by the presence of flammable gases or vapors in the air, such as natural gas or gasoline vapor. When these materials are found in the atmosphere, a potential for explosion exists, which could be ignited if an electrical or other source of ignition is present. The Code writers have referred to this first type of hazard as Class I. So, a Class I Hazardous Location is one in whichflammable gases or vapors may be present in the air in sufficient quantities to be explosive or ignitable. Some typical Class I locations are:

The second type of hazard listed by the National Electrical Code are those areas made hazardous by the presence of combustible dust. These are referred to in the Code as “Class II Locations.” Finely pulverized material, suspended in the atmosphere, can cause as powerful an explosion as one occurring at a petroleum refinery. Some typical Class II locations are:

Class III hazardous locations, according to the NEC, are areas where there are easily-ignitable fibers or flyings present, due to the types of materials being handled, stored, or processed. The fibers and flyings are not likely to be suspended in the air, but can collect around machinery or on lighting fixtures and where heat, a spark or hot metal can ignite them. Some typical Class III locations are:

In the normal condition, the hazard would be expected to be present in everyday production operations or during frequent repair and maintenance activity.

When the hazardous material is expected to be confined within closed containers or closed systems and will be present only through accidental rupture, breakage or unusual faulty operation, the situation could be called “abnormal.”

The Code writers have designated these two kinds of conditions very simply, as Division 1 – normal and Division 2 – abnormal. Class I, Class II and Class III hazardous locations can be either Division 1 or Division 2.

Good examples of Class I, Division 1 locations would be the areas near open dome loading facilities or adjacent to relief valves in a petroleum refinery, because the hazardous material would be present during normal plant operations.

Closed storage drums containing flammable liquids in an inside storage room would not normally allow the hazardous vapors to escape into the atmosphere. But, what happens if one of the containers is leaking? You’ve got a Division 2 -abnormal – condition . . . a Class I, Division 2 hazardous location.

So far we’ve covered the three types of hazardous locations:

Class I – gas or vapor

And secondly, kinds of conditions:

Now let’s move on to a discussion of the nature of hazardous substances.

The gases and vapors of Class I locations are broken into four groups by the Code: A, B, C, and D. These materials are grouped according to the ignition temperature of the substance, its explosion pressure, and other flammable characteristics.

The only substance in Group A is acetylene. Acetylene makes up only a very small percentage of hazardous locations. Consequently, little equipment is available for this type of location. Acetylene is a gas with extremely high explosion pressures.

Group B is another relatively small segment of classified areas. This group includes hydrogen and other materials with similar characteristics. If you follow certain specific restrictions in the Code, some of these Group B locations, other than hydrogen, can actually be satisfied with Group C and Group D equipment.

Group C and Group D are by far the most usual Class I groups. They comprise the greatest percentage of all Class I hazardous locations. Found in Group D are many of the most common flammable substances such as butane, gasoline, natural gas and propane.

In Class II – dust locations – we find the hazardous materials in Groups E, F, and G. These groups are classified according to the ignition temperature and theconductivity of the hazardous substance. Conductivity is an important consideration in Class II locations, especially with metal dusts.

Metal dusts are categorized in the Code as Group E. Included here are aluminum and magnesium dusts and other metal dusts of similar nature.

In Group G we have grain dusts, flour, starch, cocoa, and similar types of materials.

There are three types of hazardous conditions: Class I – gas and vapor, Class II – dust, and Class III – fibers and flyings.

There are two kinds of hazardous conditions: Division 1 – normal, and Division 2 – abnormal.

And finally, there is the nature of the hazardous substance . . . where we find Groups A, B, C, and D in Class I locations, and, in Class II locations: Groups E, F, and G.

Let’s illustrate our Code “translation” with an example. How would we classify a storage area where LP gas is contained in closed tanks? LP gas is a Class I substance (gas or vapor). It’s Division 2 because it would only be in the atmosphere if an accidental rupture or leakage occurred, and it is Group D material.

The table below summarizes the various hazardous (classified) locations.